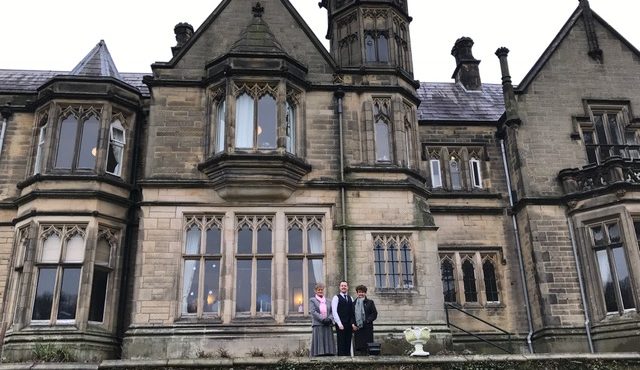 The team is one of only five to showcase their well-dressing skills at the prestigious event – the first ever RHS Well Dressing Competition – when visitors will be able to vote for their favourite design.

More than 62,000 tickets have already been sold for the Show, which takes place from 7th to 11th June, when the Bakewell team’s A.J. well-dressing will be on display.

The design focuses on one of Bakewell’s oldest buildings, Burton Closes Hall, which now operates as a care home.

“Burton Closes Hall is a beautiful building with a great deal of history and worthy as the centerpiece for a magnificent well-dressing design by the talented and passionate Sue Hudson of Bakewell AJ Welldressing team.

“Our residents are absolutely thrilled to know their care home will be featured in such a prestigious competition. We can’t wait to see the final design in full bloom in June.”

Burton Closes Hall was built in 1848 and has retained the majority of its original features. Architect Augustus Pugin, known for designing the interior of the Palace of Westminster, incorporated many of his gothic revival stylings into the building.

The well-dressing design is the creation of Sue Hudson who has continued the tradition of Bakewell well-dressings along with sister, Christine Barks, following its revival by their father and horticulturalist A. J. Goudie in 1967.

Marking the golden anniversary of the town’s well-dressing revival, Sue and Christine will lead a team of local volunteers in their creation for the RHS Chatsworth Flower Show.

The sisters are following in their father’s footsteps, who was passionate about the tradition of well-dressing, using it to put Bakewell on the map and help bring tourists to the town.

In 1977, A. J. Goudie presented a well-dressing at the RHS Royal Chelsea Flower Show, honouring the Queen on her Silver Jubilee, and winning The Lindley Medal for Outstanding Beauty.

Two years later, he returned to the Chelsea Flower Show with the support of the then Duke and Duchess of Devonshire, who offered a gold-leaf frame and use of the Chatsworth House gardens. A.J. Goudie won The Banksian Medal and the success lead to a yearly well-dressing in Bakewell’s Bath Gardens, a tradition continued by his daughters today.

Tickets to RHS Chatsworth Flower Show can be bought at rhs.org.uk/flowershows.