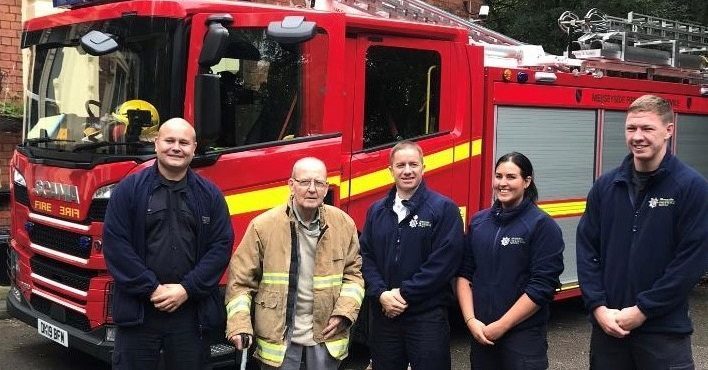 A FORMER firefighter’s wish came true when he got to ride in a fire engine again nearly three decades after retiring.

Merseyside Fire and Rescue Service granted 85-year-old Les Storey’s wish after being contacted by staff at the care home where he lives.

Les wrote on his leaf: “I wish for a tour around a modern fire engine as I used to be in the fire brigade.”

Abigail, who is attempting to fulfil all the residents’ wishes, contacted Merseyside Fire and Rescue Service, who were happy to oblige.

Several members of the service visited the home with a fire engine, which Les not only got to explore but was also taken for a ride in, with lights and siren blaring.

He also got to wear a firefighter’s jacket and helmet, before regaling the fire crew of his days as a firefighter at Durning Road Fire Station.

Les joined the fire service in 1959, performing fire and rescue services in Liverpool for more than two decades, before retiring in 1981 due to injury.

He said: “I went on my bicycle to the training school and it was a long way from where I lived but I made it.

“I remember we all had black helmets in those days and we got issued with a pot of yellow paint and had to paint them because that was when firefighters started wearing yellow helmets.

“Our motto was “if it’s burning, send for Durning”.”

After his first time in a modern fire engine, Les said: “It has been a great day. It’s fantastic to see how much technology has come on.

“It was nice reminiscing with the fire crew about old times. I told them a good few stories about my firefighting days.”

Abigail said: “Les had a fantastic day thanks to Mersey Fire and Rescue Service. We can’t thank them enough for helping us fulfil his wish.

“We’ve already fulfilled many of our residents’ wishes, which also included visiting the local pub for a pint of John Smiths bitter and going to Prescott town centre for a shopping trip, among others.

“The wish tree started out as an arts activity but it has become a great way to get to know the residents better, learn about their pasts and interests.

“We’ll definitely be encouraging residents to add more wish leaves to the tree.”

Afternoon tea at Tiffany’s for queens of Bolton care home