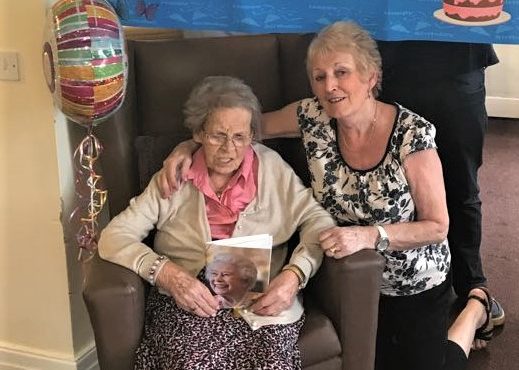 The home, in Lemington, Newcastle Upon Tyne, threw a birthday party to mark Isabelle’s centenary.

Family, friends and staff attended to wish her a happy 100th and share a slice of cake.

Isabelle said: “I had a lovely day.”

Isabelle was born in Bellingham, Northumberland, on 20th August 1917, a year before the end of World War I.

She attended school in the village before going into domestic service upon leaving.

During World War II, Isabelle joined the WAAF to help with the war effort, alongside more than 180,000 other women at its peak.

As the war progressed, they diversified into code and cipher interceptors, mechanics, engineers and electricians.

After the War, Isabelle met and later married William Mullen in 1949. The couple moved to Newcastle, where they had daughter Noreen.

After William passed away, Isabelle moved into sheltered accommodation, before moving to Waverley Lodge Care Home in November 2015.

“Belle is a very special lady and we were so happy to be able to celebrate this milestone with her.”